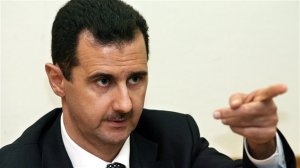 Bashar al-Assad took advice from Iran on how to handle the uprising against his rule, according to a cache of what appear to be several thousand emails received and sent by the Syrian leader and his wife. The Syrian leader was also briefed in detail about the presence of western journalists in the Baba Amr district of Homs and urged to “tighten the security grip” on the opposition-held city in November.

The revelations are contained in more than 3,000 documents that activists say are emails downloaded from private accounts belonging to Assad and his wife Asma. The messages, which have been obtained by the Guardian, are said to have been intercepted by members of the opposition Supreme Council of the Revolution group between June and early February.

The documents, which emerge on the first anniversary of the rebellion that has seen more than 8,000 Syrians killed, paint a portrait of a first family remarkably insulated from the mounting crisis and continuing to enjoy a luxurious lifestyle. They appear to show the president’s wife spending thousands of dollars over the internet for designer goods while he swaps entertaining internet links on his iPad and downloads music from iTunes.

As the world watched in horror at the brutal suppression of protests across the country and many Syrians faced food shortages and other hardships, Mrs Assad spent more than £10,000 on candlesticks, tables and chandeliers from Paris and instructed an aide to order a fondue set from Amazon. The Guardian has made extensive efforts to authenticate the emails by checking their contents against established facts and contacting 10 individuals whose correspondence appears in the cache. These checks suggest the messages are genuine, but it has not been possible to verify every one.

The emails also appear to show that:

• Assad established a network of trusted aides who reported directly to him through his “private” email account – bypassing both his powerful clan and the country’s security apparatus.

• Assad made light of reforms he had promised in an attempt to defuse the crisis, referring to “rubbish laws of parties, elections, media”.

• A daughter of the emir of Qatar, Hamid bin Khalifa al-Thani, this year advised Mr and Mrs Assad to leave Syria and suggested Doha may offer them exile.

• Assad sidestepped extensive US sanctions against him by using a third party with a US address to make purchases of music and apps from Apple’s iTunes.

• A Dubai-based company, al-Shahba, with a registered office in London is a key conduit for Syrian government business and private purchases of Mrs Assad.

Activists say they were passed username and password details believed to have been used by the couple by a mole in the president’s inner circle. The email addresses used the domain name alshahba.com, a group of companies used by the regime. They say the details allowed uninterrupted access to the two inboxes until the leak was discovered in February. The emails appear to show how Assad assembled a team of aides to advise him on media strategy and how to position himself in the face of increasing international criticism of his regime’s attempts to crush the uprising, which is now thought to have left 10,000 dead. Activists say they were able to monitor the inboxes of Assad and his wife in real time for several months. In several cases they claim to have used information to warn colleagues in Damascus of imminent regime moves against them.

The access continued until 7 February, when a threatening email arrived in the inbox thought to be used by Assad after the account’s existence was revealed when the Anonymous group separately hacked into a number of Syrian government email addresses. Correspondence to and from the two addresses ceased on the same day. The emails appear to show that Assad received advice from Iran or its proxies on several occasions during the crisis. Before a speech in December his media consultant prepared a long list of themes, reporting that the advice was based on “consultations with a good number of people in addition to the media and political adviser for the Iranian ambassador”.

The memo advised the president to use “powerful and violent” language and to show appreciation for support from “friendly states”. It also advised that the regime should “leak more information related to our military capability” to convince the public that it could withstand a military challenge. The president also received advice from Hussein Mortada, an influential Lebanese businessman with strong connections to Iran. In December, Mortada urged Assad to stop blaming al-Qaida for an apparent twin car bombing in Damascus, which took place the day before an Arab League observer mission arrived in the country. He said he had been in contact with Iran and Hezbollah in Lebanon who shared his view.

“It is not out of our interest to say that al-Qaida is behind the operation because this claim will [indemnify] the US administration and Syrian opposition,” Mortada wrote not long after the blasts. “I have received contacts from Iran and Hezbollah in my role as director of many Iranian-Lebanese channels and they directed me to not mention that al-Qaida is behind the operation. It is a blatant tactical media mistake.” In another email Mortada advised the president that the regime needed to take control of public squares between 3pm and 9pm to deny opposition groups the opportunity to gather there.

Iran and Hezbollah have been accused throughout the year-long uprising of providing on-the-ground support to the regime crackdown, including sending soldiers to fight alongside regime forces and technical experts to help identify activists using the internet. Iran and Hezbollah both deny offering anything more than moral support. Among those who communicated with the president’s account were Khaled al-Ahmed who, it is believed, was given the task of advising about Homs and Idlib. In November Ahmed wrote to Assad urging him to “tighten the security grip to start [the] operation to restore state control in Idlib and Hama countryside”.

He also advised Assad that he had been told European reporters had “entered the area by crossing the Lebanese borders illegally”. In another mail he warned the president that “a tested source who met with leaders of groups in Baba Amr today said a big shipment of weapons coming from Libya will arrive to the shores of one of the neighbouring states within three days to be smuggled to Syria”. The emails offer a rare window into the mind of the isolated Syrian leader, apparently lurching between self-pity, defiance and flippancy as he swapped links to amusing video footage with his aides and wife. On one occasion he forwards to an aide a link to YouTube footage of a crude re-enactment of the siege of Homs using toys and biscuits.

Throughout 2011, his wife appears to have kept up regular correspondence with the Qatar emir’s daughter, Mayassa al-Thani. But relations appear to have chilled early this year when Thani directly suggested that the Syrian leader step down. “My father regards President Bashar as a friend, despite the current tensions – he always gave him genuine advice,” she wrote on 11 December. “The opportunity for real change and development was lost a long time ago. Nevertheless, one opportunity closes, others open up – and I hope its not too late for reflection and coming out of the state of denial.”

A second email on 30 January was more forthright and including a tacit offer of exile. “Just been following the latest developments in Syria … in all honesty – looking at the tide of history and the escalation of recent events – we’ve seen two results – leaders stepping down and getting political asylum or leaders being brutally attacked. I honestly think this is a good opportunity to leave and re-start a normal life. I only pray that you will convince the president to take this an opportunity to exit without having to face charges. The region needs to stabilise, but not more than you need peace of mind. I am sure you have many places to turn to, including Doha.”

The direct line of reporting to Assad, independent of the police state’s military and intelligence agencies, was a trait of his father, Hafez al-Assad, who ruled Syria for three decades until his death in 2000 ushered the then 36-year-old scion into the presidency. Assad Sr was renowned for establishing multiple reporting lines from security chiefs and trusted aides in the belief that it would deny the opportunity for any one agency to become powerful enough to pose a threat to him. His son has reputedly shown the same instincts through his decade of rule. The year-long uprising against his decade of rule appeared to be faltering this week as forces loyal to Assad retook the key northern city of Idlib.

Much of Assad’s media advice comes from two young US-educated Syrian women, Sheherazad Jaafari and Hadeel al-Al. Both regularly stress to Assad, who uses the address sam@alshahba, the importance of social media and the importance of intervening in online discussions. At one point, Jaafari boasts that CNN has fallen for a nom-de-guerre that she set up to post pro-regime remarks. The emails also reveal that the media team has convinced Twitter to close accounts that purport to represent the Syrian regime.

Several weeks after sam@alshahba.com email was compromised in February, a new Syrian state TV channel broadcast two segments denying the email address had been used by Assad. Opposition activists claim that this was a pre-emptive move to discredit any future leaking of the emails.

On Wednesday Assad announced new parliamentary elections to be held across Syria on 7 May. The move appears to be in response to Kofi Annan’s demand following his visit to Damascus over the weekend for a ceasefire coupled with elections. Activists have described a referendum last month that paved the way for the poll as a sham.

There was further bloodshed on the ground. Opposition activists said government forces killed dozens of people near a mosque in the city of Idlib, with rebels killing at least 10 troops in the same area. In Homs, residents said the old part of the city came under government bombardment. They also reported a massacre of 53 people in the Karm el-Zeytoun area of south-east Homs.

The US president, Barack Obama, signed an executive order last May imposing sanctions against Assad and other Syrian government officials.

In addition to freezing their US assets, the order prohibited “US persons” from engaging in transactions with them. The EU adopted similar measures against Assad last year. They include an EU-wide travel ban for the Syrian president and an embargo on military exports to Syria.