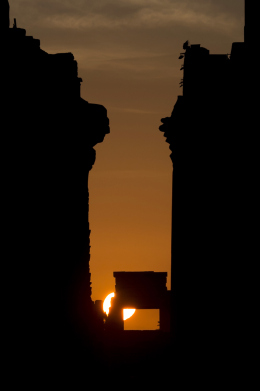 The sun rises behind the Temple of Karnak Temple during the alignment of the winter solstice sunrise to the temple in the southern Egyptian city of Luxor on December 21.

A year has passed since the great Mayan apocalypse of 2012; we are all still here and the winter solstice, one more time, is again upon us.

The winter solstice marks the shortest day of the year for dwellers in the Northern Hemisphere, and the longest day of the year for those south of the equator. Darkness cast a great shadow over the Northern Hemisphere and the sun halt its orbit and change paths, eventually moving northward and inching toward more sunlight for those of us in the north.

The winter solstice always occurs at a specific time, not just day. This year, it was at 12:11 p.m. EST on Saturday, December 21 that the he sun shone directly over the Tropic of Capricorn. The farthest south the sun reached, the colder the temperatures in the north. In the Southern Hemisphere, it was the longest day of the year.

Several centuries ago, the Christian church tied the birth of Jesus Christ, to the Roman holiday “Dies Natalis Solis Invictus” [The Birthday of the Unconquerable Sun], where the “Solar disk” stops its run in heaven for three days before rising high again in the sky reversing its course. As for the Romans, the Christians and the Egyptians a long time before them and many other Ancient cultures, the winter solstice serves a turning point in in their spiritual and religious beliefs, which is why it was tied to the Mayan apocalypse scare that marked the end of the calendar and to some believers, the end of the world.

This year, North America has seen nine hours and thirty-two minutes of daylight during the solstice, and fourteen hours and twenty-eight minutes of nighttime. But the winter solstice doesn’t always happen at the same time. Next year northern dwellers can expect the solstice at 11:03 p.m. and in 2015 it will occur on December twenty-second. This is to say that the sun will die on the twenty-second day of December only to resurrect three days later on December twenty-fifth. And since the beginning of times, this is this eternal cycle that the twelve constellations of our solar system, the twelve apostles of the sun, of the solar disk have been witnessing year after year.